A very fast way to deploy your application with GitHub

To make this project live, we’ll use the following tools:

At this point, keep the value generated in the field Service account ID. It is the service account username that will be used later. It should look like github-actions@key-partition-000000.iam.gserviceaccount.com.

Clicking on the “Create” button brings up the roles configuration stage. We need two roles:

Clicking on the “Create” button brings up the roles configuration stage. We need two roles:

Now that we have a user with the proper permissions, we need to activate the two services we need.

To initiate the project, let’s create a GitHub repository and add several files:

Cloud Run listens on localhost:8080. So, the first step is to set these values with server_name and listen.

Then, we configure the file location that nginx should serve; the root key is where all the static files to serve are located. In this example, that’s in usr/share/nginx/html. The index key declares to nginx what root files to resolve; here, index.html or index.htm will be resolved.

Finally, we forward the 50X errors to a special file with the command error_page and handle the mapping in nginxwith location to our error HTML file.

Since our application is really simple, we only have three steps in our Docker file:

This is probably the most complicated part of the project, although you’ll see that it’s still pretty simple.

Our project will make the deploy on every commit made on the master branch. We will, however, ignore everything made on the other branches since it’s a deployment script. If you need to go further, you may want to make a deploy on a different endpoint for every other branch, but that’s not today’s topic.

Our CD also has only one job, since we have a pretty simple application -simple nginx server with static files. But in real life, you may want other steps to build your application, or to run the tests, for example. We choose to run the build on ubuntu-latest, but other possibilities are available.

The job will be composed of several steps. But before digging into them, let’s see what actions are required:

Now let’s dive into the steps. There are six of them:

The first one is to ensure you get the application sources from GitHub. Because Actions might be triggered on issue creation, for example, in which we probably don’t need to get the sources. GitHub gives only the mandatory data by default.

The second one uses the Docker to build our image. Moreover, since we are uploading the image to Google Cloud Container Registry, we have to tag it with the name of the target image URI. The URI is built using:

The third step is the beginning of GCP-related commands. We first need to authenticate ourselves with the secret key GCLOUD_AUTH via the auth action.

The fourth step links GCP and Docker together so it knows where to push images.

The fifth step consists of uploading our image on the container registry. This one has a specificity: we need to use both Docker and GCloud in that command, so choose the GCloud action, and use the sh entrypoint in order to have both thegcloud and docker commands available, to push the image. Thanks to the fourth step, Docker will push images in the right place.

The final step is actually two commands. Here, the result of the first is not available in the second if we split them into two different steps. The two commands are responsible for: 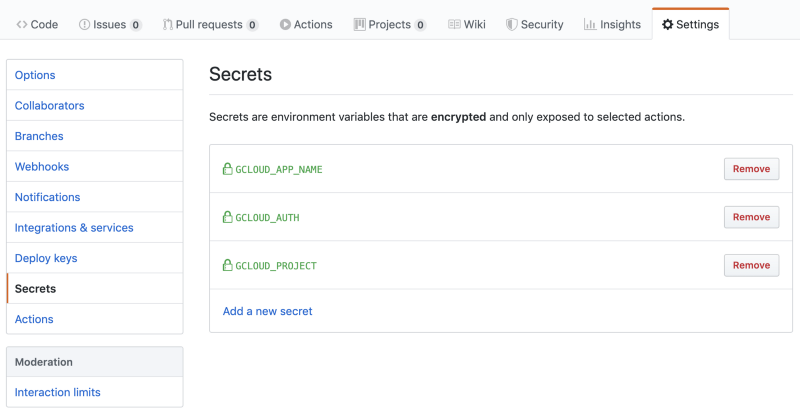 In our YAML file, we reference three secret keys:

And we’re ready to execute our deployment from GitHub Actions!

We can now deploy our project continuously and easily on Google Cloud Run. Our example is pretty simple, but since we’re using a Docker image, we’re free to have any kind of application we want. Just note that the application must listen to the PORT environment variable: Cloud Run will only listen to an app on that port!

You can find the sources on Github.

You liked the post? Consider donating!
Become a patron
Buy me a coffee